It was very hot in the Studio and the Quartet did well to play so beautifully. Not only that but their professionalism was manifest in the way that they seemed so un-phased by the cameras, even though it was a totally new experience for them. We had specifically placed the projections behind each musician so that no-one  would be distracted by a large scale images of him or herself but they must have been highly aware of the two roving cameraman. Whilst their playing in our rehearsals had been wonderful, the extra mile that they went for the performance itself was extraordinary and I was deeply impressed. 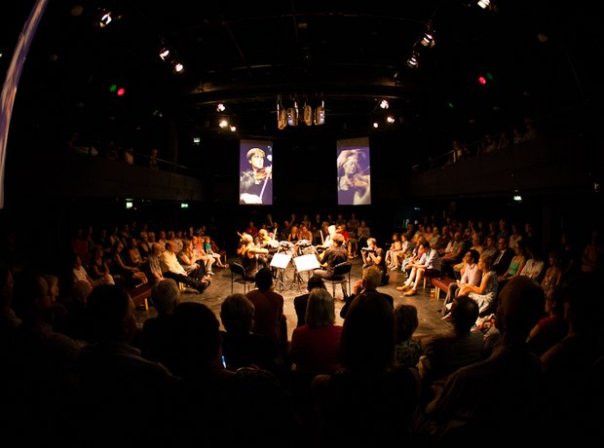 As documented by Classic FM

During the performance, I stood downstairs at the back, whilst in the rehearsals I had moved around to experience the playing from different perspectives.  Everything worked in terms of the tech and I was really pleased with the lighting. Whilst there were moments when the cameramen were a bit noisy, particularly when they came on, I was delighted with the shots that they achieved and with the live mixing from our VJs to layer these close-ups over the static mid-shots. I also felt very strongly that we had made the right decision to simplify the visual intervention in the third movement.